Leaving the Clubrooms on Thursday June 18 at 9 am with 18 cars which included 4 moderns, along the way 2 more joined in and 1 met us at Angaston. 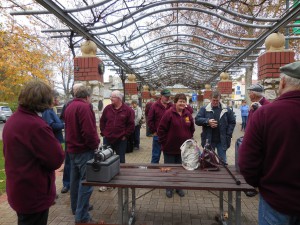 We travelled via Cambrai and Sedan, up the hills through Kyneton to Angaston for morning tea, it was cold but no rain. It was a nice drive, the country was looking good, especially the stone fences which are a work of art.

After morning tea we went to Greenock via Nuriootpa to Lincoln Nitschke’s Aviation Museum, by this time the barbecue lunch and salads were ready. After the meal his talk was very interesting, as from a child of 9 or 10 he was interested in aviation and has over 1400 models on display in cabinets that line the walls of the exhibition area, he also had spent some years in New Guinea flying.

The display of Air Force planes in the shed and outside gave us an insight of the war planes during World War 2, unfortunately he couldn’t start the Rolls Royce V12 motor but he did start the Commer knocker for us.

About 2.30 pm we left Greenock for Seppeltsfield Winery tour and tasting, the tour was through the grounds and old buildings that were built 120 years ago by Joseph Seppelt. 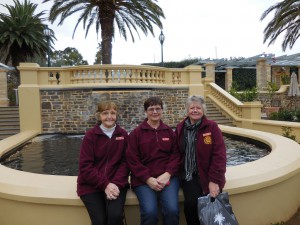 L to R: Aileen Rhonda and Yvonne at Seppeltsfield Winery

He arrived from Silesia (modern day Poland) as a Tobacco Merchant but found the area was not suitable for growing tobacco. After seeing all the vines growing he decided to change to grapes. As there wasn’t anywhere to sell the grapes he decided to build a winery to make wine. It was built on the side of a hill, crushing the grapes at the top and letting the juice gravitate down the hill to tanks below, a very smart man, the building is still used today but with lots of modification.

There were 120 people working for him and his wife supplied a hot meal every day for them. He also built houses for the workers. These days Seppeltsfield has 3000 acres of grape vines. After a tasting of some wines we were only given a smell of the 100 year old Port before members made their own way home. I would like to thank the members who went on the trip and hope you all enjoyed it. From the interstate visitors, a special thank you to the members for allowing them to accompany us on the trip, they enjoyed it and really appreciated being made so welcome.