Old and new members of the Auto Collectors Club of Murray Bridge (ACCMB) met at their clubrooms on Wednesday October 14 to take part in a mid – week run to Mypolonga. 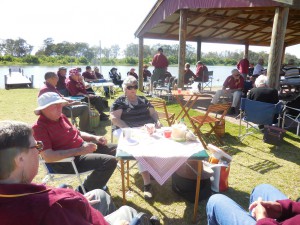 The convoy travelled via Mannum, and Caloote roads, stopping at the tiny Murray River settlement of Caloote Landing for morning tea.
Chairs and tables were set up on the lawns adjacent to the river in perfect spring weather with the 45 members enjoying each other’s company. With appetites satisfied it was time to pack up and move off to the first place of interest to visit in Mypolonga.

Members were met by Mr. Robert Phillips of Murray Valley Citrus, who along with his wife Helen and family, run the packing shed , wonderful gardens of exotic plants, palms and a wonderful collection of birds, alpacas and wallabies. Mr. Phillips proceeded to talk the group through his gardens, birds and wildlife and finally through their very clean and productive packing shed. ACCMB members were particularly impressed and interested in the display of the scarlet Macaw birds. On completion of the morning tour, run organizers Roy and Elaine Bretag thanked Mr. Phillips for his time and allowing members to view his premises, before presenting him with a gift of appreciation. 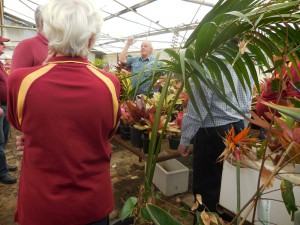 Members then proceeded through Mypolonga, along North Bakara Rd. in their 23 shiny automobiles to Woodlane Reserve for midday lunch. Again tables and chairs came out, and as the lazy river flowed past with houseboats on the move a lone goose came wandering by to see if there was any spare food available from members picnic lunches being eaten.

Last stop of the day and it was off to the processing operations of Aussie Apricots, again in Mypolonga. The ACCMB members were met by owners Paul and Kathy Prosser and treated to samples of Aussie Apricots’ many scrumptious products. This was followed by a very informative talk by both Kathy and Paul. Firstly, Paul informed members of the Prosser family history in Mypolonga and that he was the 3rd generation of the late Henry Edgar Prosser ( H.E. Prosser and Sons P/L), who started farming in Mypolonga on a small parcel of land in the 1940s running dairy cows and agriculture. 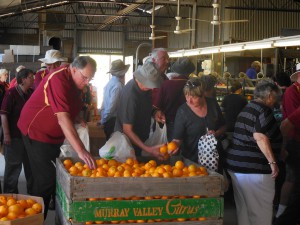 The farm built its first chicken shed in 1949 housing 1,000 chickens. As a youth Mr. Prosser began to help out on the farm, after leaving school in 1983 at the age of 15. More chicken sheds were built, orange and apricot trees were grown, and because of the drought, low river and a lack of water, a new direction needed to be taken. 2006 saw the birth of Aussie Apricots, a venture by Mrs. Kathy Prosser, which has continued to flourish into the successful business that it is today, supplying chocolate apricots and oranges, along with many other products to many states of Australia. 2015 has seen the family farming 2,000 apricot trees, peach & navel oranges along with 248,000 chickens per batch – a long way from the 1,000 birds of 1949. 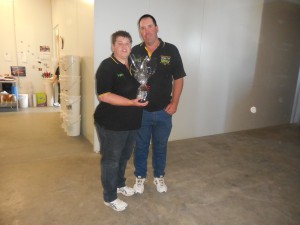 Prior to ACCMB leaving for home, many members made big purchases of Kathy’s many chocolate products and again a vote of thanks and a gift was presented by the Bretag’s.

ACCMB members responded with acclamation and agreeing it had been yet another successful club run in the life of the collectors.