Some members arrived at Pinnaroo on Friday between 11.30 am and 2 pm. We didn’t arrive until 8 pm when our members were leaving the hotel after enjoying a great meal, it was a very cool evening.

Saturday morning at 9.30 am we walked to the street to visit the Op shop where there were plenty of new things to look over. Members scored books bags clothing and jewellery, and not only the women but the men were browsing as well. We then moved on to the Bakery for morning tea, it was a very popular place we had a bit of a wait for our coffees to be served. 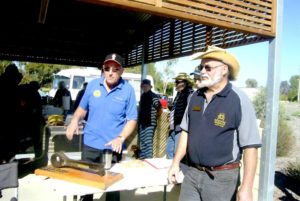 At 12.30 members in 25 cars drove to the Football oval and assembled at the entrance ready to leave for a tour to Greg and Michelle Thomas’ farm which is called Ups and Downs, a property of 10,000 acres with many sheep.  Greg gave a talk about his collection of tractors which he had been collecting over a period of 7 or 8 years, he has 130 tractors and not one of them is in running order. He then took us over to his shed and paddock to look at his tractors, Fordsons, Oliver, McCormick-Deering, Case, Hart, Fordson Major, Chamberlain, Massey Ferguson, John Deer, International, Massey Harris and many more.

The ladies viewed Michelle’s lovely garden of shrubs, flowers and a vegetable garden. The outside toilet was very interesting. Michelle was not at home, she was with her daughter at the Netball therefore we didn’t get to meet her.

We had a lovely afternoon tea which consisted of scones with jam and cream, cheese and biscuits and home made cakes, thanks to the Murray Mallee Club. Afterwards we went back to the Caravan Park for relaxation and get together.  Saturday evening we all gathered at the shed for a BBQ tea with pooled salads and sweets. It was warm in the shed and we had a campfire outside where many jokes were told.

Sunday morning at 9 am we all headed off to the Wetlands where we had  Tappet Cover races on a timber track and then the games to compete for the Conrod Trophy. The first game we had to throw 3 golf balls into a bag, I think you use a golf club to practice a hole in one with scores of 50 75 and 100. This was followed with  Egg and Spoon races, Horse and Jockey Races and Quoits.

We all enjoyed the weekend and are looking forward to seeing you next year, please come along and join in the fun. Thanks to Ron and Fina Jellett, our new members, for coming and having fun with us. Also in attendance were Terry and June Mabbitt, Roy and Elaine Bretag, Ted and Ruth Julian, Mike and Arlene Chapman and Alan and Marlene Hagger. Next year it is the turn of the Auto Collectors Club to host the Campout and organise a place to visit, afternoon tea and the games.

Some of the tractors in Greg and Michelle’s collection