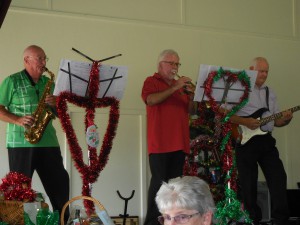 From L to R: Graham Edwards on Saxophone, Howard Wright on Trumpet and Peter Gueu on Guitar.

With a scorching temperature of 42° predicted, most of the group assembling at the Clubrooms had opted for their modern cars, with, of course, air-conditioning. However, there were a couple of dyed-in-the-wool members who ignored their own possible discomfort and brought out the old vehicles regardless. I make mention of :- Eric and Pam Wehrman in their 1956 Humber Hawk sedan, Trevor Wehrman (with passenger, Michael Nelson) in his parents’ 1925 Chevrolet Tourer and Kevin and Irene Veitch in their 1964 Ford Falcon Sprint. Well done to these stalwarts!
There were already many of our members working diligently at the Palmer venue when our group arrived at about 10 am.  Fruit was being cut up ready for fruit salad, people were bringing in their bags of goodies, the urn was bubbling, raffle tickets were being sold and the air-conditioning was running (thank goodness!) A small party of 8 had set up the tables, chairs, table decorations and Christmas Tree on the preceding day. Numbers attending were down a little on last year, but the festiveness, good cheer and happy faces were there in abundance.
Just before 11 am President John Courtney got the day started by welcoming everyone and thanking them for braving the weather. He then handed over to yours truly for the rest of the day’s programme. 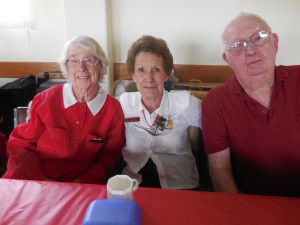 Firstly, everyone who had helped make the day happen, in so many different ways, was acknowledged and thanked most sincerely, followed by the first of the entertainment items, namely instrumentalists Howard Wright (trumpet), Peter Geue (guitar), Jill Matschoss (keyboard) and Graham Edwards (saxophone) playing a few, well-known, old songs. After that, Myra Wright, who with her assistant (Vicki Courtney) had organised several beautiful baskets of goodies as prizes, officiated at the first two draws of the raffle. The lucky winners were Glenda Wilkins and Lorraine Wye. Then it was time for everyone to be thoroughly entertained by Jill Matschoss, accompanied by Peter Geue, with a comedy rendition of a Christmas catering scenario, in which many of our members received a mention. All great fun!
By 12 noon, our own catering group, led most ably by Brenda Cowie, had lunch ready for the hungry hordes. It was a feast fit for royalty, with an array of cold meats accompanied by a super variety of salads supplied by our members. As if this were not enough, it was capped off by a refreshing fruit salad and ice-cream dessert – just the ticket on such a hot day. 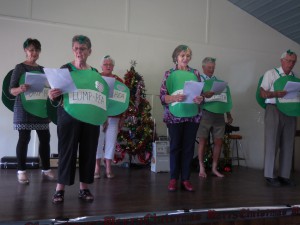 With lunch behind us, the entertainment continued with six of our members performing “The Frozen Green Pea Christmas Song”. Costumed as “green peas”, and individually named as “Hap-Pea”, Grump-Pea”, etc., it was sung to the tune of “Jingle Bells” and was well received by those in the audience.
The final two raffle draws were conducted and Pat Jennings and Mike Chapman had big smiles on their faces when they received their prizes.
Jill Matschoss on keyboard then led everyone in some community singing of several Christmas songs just before Father Christmas arrived, ringing his bell. Despite his copious garb in such heat and experiencing a “vision” problem due to a cascade of snowy white hair over his eyes and face, he managed to make his way to a special chair set up specially for him, with the help of Elf No. 2 (yours truly). Elf No. 1 (Jill Matschoss) made her way from her position at the keyboard to conduct an entertaining conversation with the Man In Red. It appears he’d had his troubles, with Rudolph, chimneys, and so forth! Then it was time for him to hand out the gifts and make his knee ready to receive all manner of recipients. Of course, Pat Kuss was up to her old tricks again. That woman has a knicker fetish, surely. This time, she was complaining, not about not receiving any undies (as per last year), but about receiving inappropriate undies, g-strings (or thongs) in fact. At one point it appeared as if she was asking Father Christmas to help her put them on! A bit of a worry, is our Pat.
In the end, Father Christmas escaped relatively unscathed and we all settled down to the most splendiferous afternoon tea. President John Courtney rounded off the day by thanking everyone concerned in the organisation before we packed up, cleaned up and headed home.
Everyone involved did a wonderful job in arranging a very entertaining day, which I am sure was enjoyed by all who attended.