The first day of September each year is promoted by “The Federation of Historic Motor Vehicles, South Australia as “Drive Your Old Car Day”.
Owners of veteran, vintage and classic vehicles are urged to take their historic vehicles out for the day so that the public can see them by taking them to work, shopping, go for a drive or organize a run.
Local Auto Collectors Club of Murray Bridge (ACCMB) membership director, Neil Schubert and wife May organized such a day run, including the staging of the late Life Member, Paul Kruger perpetual Economy Run Trophy.
35 ACCMB members assembled at their Johnstone Park clubrooms for final briefing prior to the commencement of the 62 mile run. 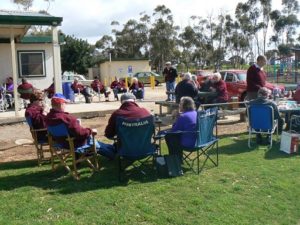 Morning tea was enjoyed by all at Callington Oval

Much interest was shown toward two newly arrived vehicles not seen at the club before.
The first a 1979 Silver Shadow Rolls Royce owned by new members, John and Wendy Uren and the second a 1962 “S” series Valiant owned by members Gary and Jean Northey.
With run organizer Neil giving last minute details and directions for the days run it was time for 19 vehicles to commence the Economy Run with one vehicle being chosen for members to estimate “how many miles per gallon” that vehicle, a 1965 XP Ford Falcon sedan would return for the total journey.
It was out onto Adelaide Road, along Old Princess Highway arriving at Callington oval for morning tea.
In wonderful spring weather with sun shining, chairs, tables and morning tea was consumed by ACCMB members.
Following morning tea it was off again, this time headed to Langhorne Creek via Woodchester and the little hamlet of Bletchley, driving through the colorful almond blossom orchards, vineyards and cereal crops before arriving at the “Bridge Hotel” Langhorne Creek.
Members suitably parked their vehicles so that locals and travelers alike could view some of the worlds much loved and cared for vehicles before entering the local “Watering Hole” for what was an enjoyable lunch and chat about the days run.
It was during the collection of the economy run estimates form by run coordinator Neil Schubert and the singing of happy birthday to member Dennis Scarman, that an unexpected rainstorm hit Langhorne Creek turning the car park and surrounds into a playground for ducks.
The winning estimator of the economy run trophy will be announced at the clubs presentation dinner in March 2017.
President John Courtney thanked Neil and May Schubert for the day’s organization while Neil thanked management and staff for a great meal, also thanking members for coming out to show their old cars off to the public.
A rather wet trip home for many didn’t dampen member’s spirits even though many cars saw a wet outing for the first time. 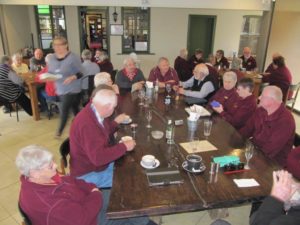 Roy Bretag was amazed by the size of his huge burger 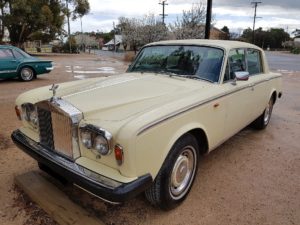 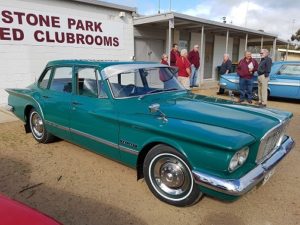