History was created on 25 April 1972 when twenty one old soldiers of the newly  formed Auto Collectors Club battled off to Mannum. The large variety of cars competing were in various stages of restoration and many added interest and excitement by only having the mice and spiders chased out, bird droppings brushed off and away they went.

Ross Regnier must be praised for the tremendous effort put into his Overland Six Roadster, and also, of course, Eric Wehrman for his nicely turned out Chev Superior.

The convoy got away to a punctual start at 25 mph, which was later increased to 30 mph so that the lone Ford T culd stretch its legs. The drivers took a spell some four miles out while the cars were lined up and impressively posed for photographs. All then proceeded on to Mannum, interrupting the journey for a number of water stops. For Leo and his Dodge Four it was a test to see which he would use up first – water, or grease for the water pump!

At Marion Park in Mannum steaks sizzled and corks popped. Stories were swapped as many envious people (IN and OUT of uniform) looked over the cars. Before the return trip commenced, a number of people were allowed to practice cranking the Ford but the driver cut this short by allowing it to start and we all lined up to wait for the ferry.

The return journey was again a series of stops and starts for water, grease and the Ford driver again stopped to practice radiator filling and pumping tyres. The pace was stepped up, but I hear that Graham Burgess’ National Chev still had the flying four in sight as we crossed the bridge to a ticker tape welcome from the E & W S.

Vehicle dispersal from the Caltex service station was notable for its rapidity as many competitors  “raced” for home while they were still going.

The first run was certainly enjoyed by all and I’m mighty glad I went. See YOU on the next one.

There were many vehicles including cars motorcycles trucks and even a caravan and hearse on display as part of  the Auto Collectors Club of Murray Bridge 40th Anniversary celebrations.

On Saturday night 182 people gathered at the Murray Bridge Golf Club for the annual Club presentations and 40 year celebrations. Guests included Murray Bridge Mayor Allan Arbon, Federation of Historic Motoring Clubs secretary Alan Pickering and Historic Registration chairman Arthur Doecke. The evening was hosted by Club president Graham Edwards and anniversary committee chairman Jeff Martin who entertained members and guests with items about the history of the club, life memberships, cake cutting and memorabilia. Some of the evening’s entertainment included an instrumental and solo item which was performed by The Old Grey Collectors, who are members of the Murray Bridge Auto Collectors Club.

On Sunday morning more than 200 people and 90 vehicles re-enacted the club’s first jaunt from Murray Bridge to Mannum where they gave residents a chance to see the magnificent cavalcade of vehicles which dated from 1924 to 1983. A procession of vehicles then returned to Johnstone Park where past and present members joined in for a barbecue lunch and public display. The run was the first time inaugural members Eric and Pam Wehrman and their family were able to take all four of their historic vehicles on a club run at the same time. 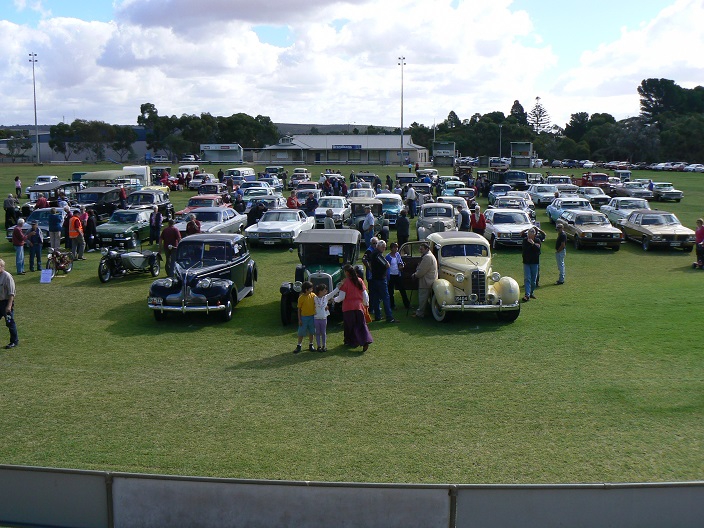