Despite the weather looking overcast, and after having plenty of rain during the night, 46 members turned out for the run to Tanunda on Thursday March 10.  Most of us decided to take our modern cars but there were still a few who braved the elements and drove their historic cars. 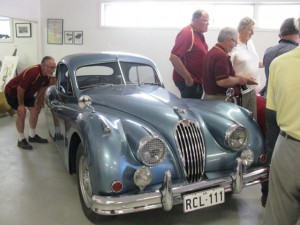 Our first stop was Mount Pleasant where we had ‘smoko’.  The rain had stopped but the ground was very wet and a little muddy. Our drive to Tanunda through a now slightly damp but still beautiful countryside was without a doubt lovely.  It doesn’t take much rain for everything to look lovely and fresh.

We arrived at Carl Lindner’s Museum at 11 am  as promised.  Carl came out and helped get us parked, greeted every one and gave us a talk on the history of his Museum.  It was lovely to find on entering the Museum that they had a stand at the door, welcoming our Club by name.

Well by now everyone was eager to start looking around. cameras were out and the oohs! and aahs! could be heard. There is no doubt that Carl has the best collection of Jaguars that we have seen, and I suspect the best in the State for a private collector. I personally didn’t count the number of cars, but Howard seems to remember hearing the number 34 and would have to be worth millions. From a female perspective I was amazed at the actual display, the showrooms were immaculate  and the cars were pristine. Carl was with us the whole time, giving everyone  his time and explaining the history of the various cars. Truly a nice man and passionate about his Museum.

We then met at the Weintel Hotel/Motel for lunch. We were in a private room looking out through a large wall of window into a garden. All lovely and green and freshly wet from the rain. By the way, the rain had stopped, the sun was out and we were all happy. We had a lovely lunch and you could hardly hear yourself think for the chatty noise from our members. The only time the noise quietened down was when our mouths were full of food!!

All in all we had a great day.  Our Club members are always responsive to runs and its made Howard’s job as Run Co-ordinator very enjoyable. We wish for  the next member who steps into this position that they enjoy the experience as much as we have.

A magazine was given to me, to be left at the Clubrooms for members to read. This will be at the Clubrooms for you to borrow and return. Upon reading the magazine we discovered that Carl has Cancer and his health is not  the best.  However, this is not stopping him from building a new house and still being involved in all things “Barossa” 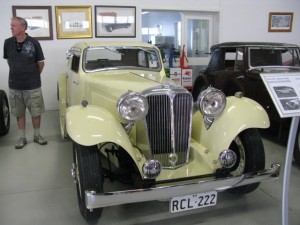