Left Clubrooms just after 9 am, drove down the main street, over the Bridge, onto Tailem Bend and before we arrived at Meningie it got very windy. The cars assembled at the Cheese Factory Museum. It was the 150th anniversary for Meningie. Firstly, everyone walked to the back shed to buy tickets for their lovely scones with jam and cream, tea and 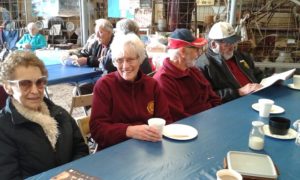 coffee. Then we moved on to the displays of many crafts that were being made – crocheting, bobbin lace, hand weaving, spinners, bead making and animals made out of wool. We enjoyed the display of tractors and stationary engines and watching the making of ropes. There was a horse which needed a name. It cost one dollar to suggest a name for it. The winner was Ivan Frahn who named the horse “Last Chance” – he won $10-00. Many people went for a ride on the Caterpillar during the day. A tempting array of BBQ patties and sausages with onion, coleslaw and also lovely hot chicken or pumpkin soup was available for lunch (no Fish). It was starting to get cold with a few showers so the raffles were drawn. Trevor Jericho won a box of goodies. Then everyone made their way home. It was a very enjoyable day. 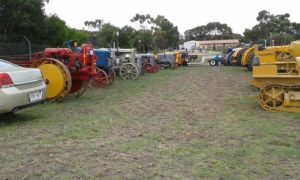 Some of the many tractors and stationery engines on display 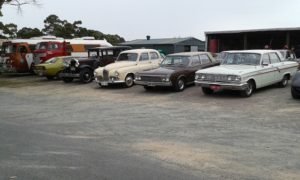 Members cars on display at the Museum