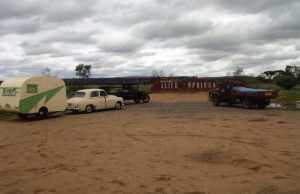 Our children, Dianne and Neil Burbidge, Julie and Noel Jackson, Jane Burbidge and Karel Jansen and Trevor Wehrman suggested that they drive our vintage vehicles to Alice Springs in order to gain the “Overland Badge” for themselves (we already have them on each vehicle). We would travel in our 1997 Holden Commodore.

We left home at 8:00 a.m. on Sunday, 6th April, 2014, stopping for Morning Tea at Springton. On leaving there, the self-starter didn’t turn the motor on the 1926 Chev Truck – it had a broken Bendix Spring. Eric replaced it with a spare. It was a fine trip from there to Wilmington, where we stayed the night in the Caravan Park.

On the next day, we had to drive down Horrocks Pass. This had Eric a little worried. He told Julie and Jane, who were driving the trucks, to leave them in second gear and to not worry about the traffic building up behind them. All went fine. The traffic was patient down through the Pass. We camped in a Rest Area north of Glendambo. Sitting around our campfire, we sang “Happy Birthday” to Karel while watching the lightning down south. 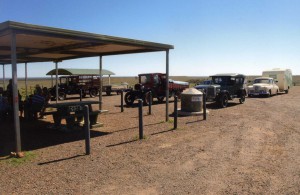 It was on to Cooper Pedy the next day, to stay in the Caravan Park when it rained during the night. On the following day, it rained very heavily, causing us to wait it out in a Rest Area. Dianne decided to enjoy herself by paddling in the large, red pool which had formed. About an hour later, the rain eased off, so we were back on the road. There was water everywhere and constant rain to Cadney Park, where we bought lunch at the Roadhouse. The rain stopped about 2:00 p.m., so we headed off to Marla and camped in the Caravan Park there. We headed to the Border next day, took photos and ate lunch, after which we continued on to Kulgera Roadhouse for fuel at $2.05 per litre. We camped in the Desert Oaks Rest Area, which is 30 kms north of Erldunda. Early next day, we headed off towards Alice Springs, stopping at Stuart’s Well Roadhouse for Morning Tea. Shortly, after leaving there, we had to stop again and change the back, left wheel on the 1927 Chev Truck – split rim!We pulled into the McDonald Ranges Caravan Park at Alice Springs at 1:00 p.m. We were given a 30th Anniversary Big4 McDonald Range Holiday Park silver goblet. 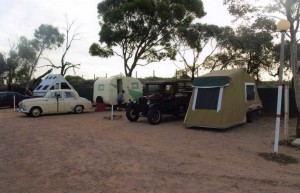 On our first, full day in Alice Springs, the men visited the Transport Hall of Fame, while we women went into the town to do some shopping. Breakfast next morning was pancakes, supplied by the Caravan Park, after which we went to MECCA Clubrooms where Dianne, Julie, Jane and Trevor were presented with their Overland Badges and Certificates. We had Morning Tea with the Club members before going to the Showgrounds for the Club BBQ and Gymkhana. We were invited to take part, so some of us did. For most of the events, the driver was blindfolded and the passenger had to direct him/her. Some of the events were:- “Weave in and out of bollards”; “Back vehicle into ‘garage’, drive 25 metres and stop on line (no passenger in this one, but the Judge was in vehicle for ‘safety reasons’); Drive (blindfolded) 20 metres, pick up a ball, turn round bollard, drive back the 20 metres and put the ball in a basket (passenger instructing the driver). Eric and Trevor were overall WINNERS of the day and were given a $40 voucher, so we went to the “Cheap Auto Store” and spent it. Julie and Noel were second place getters. 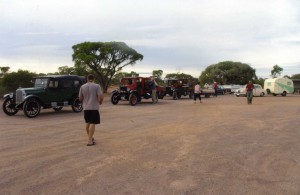 We left Alice Springs on Wednesday, 16th April, and made our way south, staying two nights at Coober Pedy, one night at Glendambo Rest Area, one at Port Augusta Caravan Park and one at Peterborough Caravan Park.

We stopped in Terowie for a look around on the following day and, immediately we pulled up, two men came and asked if they could use one of the trucks because they were filming “old” towns. They were very pleased that we arrived at the right time. The 1927 Chev Truck was parked in front of the “Wheelwright and Blacksmith” building and sign. Lots of photos were then taken.

We camped that night in Burra Gorge. Here, at the creek crossing car park, there is a very old, large tree with a hollow in it. The hollow has a book and pen therein for travellers to sign, and Yes!, we did, and we would love to know how many times we have done just that – quite a few over the years! Leaving Burra at 8:30 a.m., we headed home next morning, arriving at 2:00 p.m.

We were away 18 days, travelling approximately 3,300 kms. Even though we have done it before, it was very enjoyable and especially so having our family with us again – just like “old times”. There were minor breakdowns – fuel blockages, flat tyre and split rim. We pulled a “cross member” (which holds the gear box) off the Humber by going over a speed hump in a caravan park. There were too many of us in the Humber at the time?!)  Repairs were done in the Caravan Park  for which the proprietors gave the O.K. 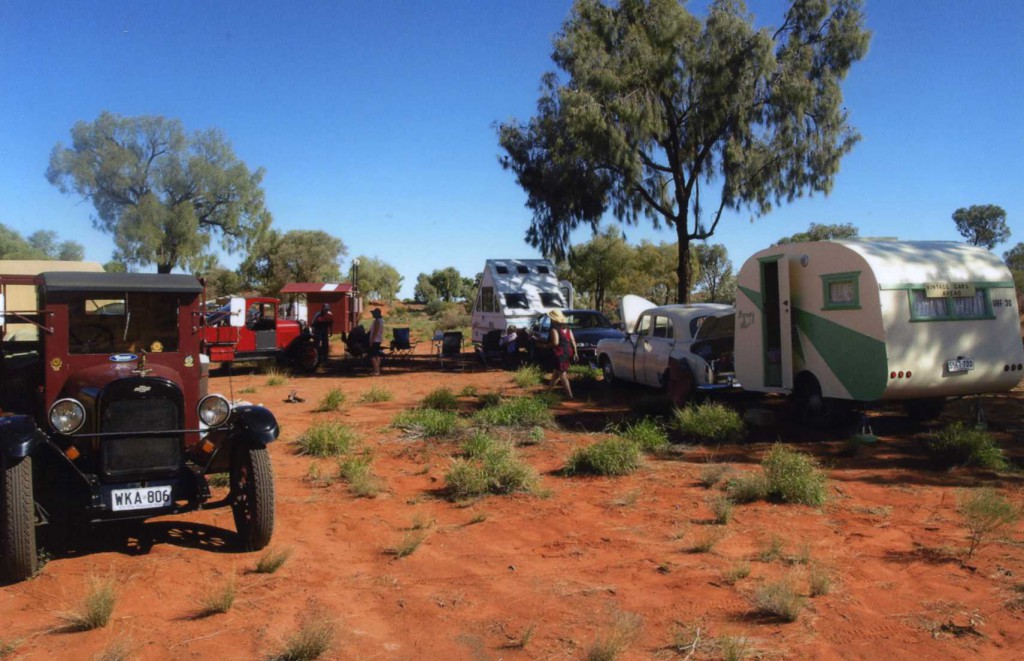