The Auto Collectors Club continue to celebrate its 40th year with the clubs first “Overseas Rally” from November 23 – 26 2012 to Kangaroo Island.

19 vehicles dating from 1924 to 1977 and 42 members left the ACCMB clubrooms on Friday  November 23 travelling via Milang, Finnis and stopping for morning tea at Victor Harbor.

Many Victor Harbor locals took the opportunity to view the fine array of vehicles, one of which was a 1956 Dodge Kingsway towing a caravan of the 60’s era. Then it was off to catch the Sealink ferry at Cape Jervis where a few Delamere / Yankalilla locals took time out to view.

Once loaded onto the ferry it was a relatively smooth crossing to Penneshaw before finally reaching Kingscote. All ACCMB members were accommodated in and around Kingscote making it a base to commence the daily runs.

Dinner Friday night was held at the Queenscliff Hotel prior to members retiring after a long day.

Saturday saw the commencement of the day in warm conditions and after meeting at the  local wharf it was off to Seal Bay, Flinders Chase, Admirals Arch and Remarkable Rocks. The return leg of the day’s trip was back to Parndana Hotel enjoying an evening meal prior to returning to Kingscote.

Sunday it was on the road again visiting the Lavender Farm and onto Emu Bay for lunch where again many locals came to the reserve to view the wide array of vehicles on show.

Early afternoon saw the group visit the very interesting Kingscote Museum. Evening meal took the form of a BBQ hosted by the Kangaroo Island Motor Club at the Brownlow Caravan Park. During the evening a cake and card to celebrate ACCMB Life Member and Vice President John Courtney’s 60th birthday was presented by President Graham Edwards and John’s wife Vickie. This was followed by a hearty rendition of Happy Birthday and Why Was He Born So Beautiful. Prior to departing the evening President Graham thanked Rally organisers Howard and Myra Wright along with helpers Peter and Pat Jennings for their dedication in organising the club’s inaugural overseas trip.

The following day for some members it was off to Penneshaw via American River in drizzling rain to again catch the ferry for the return trip back to Australia. The usual farewells took place by members who were not returning to Murray Bridge that day. By all accounts most members enjoyed their 4 days overseas with some vehicles behaving reasonably well for their individual ages.

President Graham Edwards said some members were already talking about the next Overseas Rally. 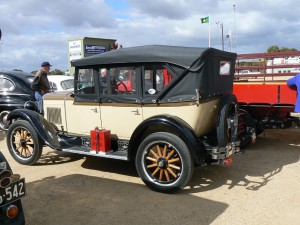