Twenty vehicles departed from Johnstone Park Clubrooms at 9:00am on  Wednesday June 20th and travelled to Mannum where three more vehicles joined our run-these were Neil Burbidge and Jim Stocker in a 1956 Morris Minor, Rhonda and Dennis Scarman (modern) and Bob and Lorraine Hall (modern).

We travelled firstly along the river and then through farming areas to Walkers Flat, where we stopped for morning tea at the Ferry Shop Carpark. Wayne Johns met us there in his 1927 Buick.

It took 6 ferry crossings to get our group across the river and then reassemble at the Lookout, where we had a fantastic view of Walkers Flat and the Mighty Murray River. I mentioned to some of our group that a short distance from where we were parked was the location of Clarrie Jones famous cliff jump. Clarrie was a former Number 1 Australian Speedway Sidecar Champion (also known as “Clarrie the Clown” at the Royal Adelaide Show), but his formal occupation was as a bricklayer in Mildura.

In 1984, he built a ramp at the edge of the cliff to launch at speed, himself astride his motorbike; pushed the bike to one side and both he and bike plummeted down into the river. Clarrie sustained a few broken bones (ribs and collarbone). He survived to race another day-the bike did not.

We all agreed it would have been a long way to fall.

Our group continued on to Swan Reach where our first stop was at Peter Detloff’s  property to view his collection of John Deere tractors, 19 in total-all pre-mid 1950’s.

His collection gave us an insight into how tractors have evolved in design and capability. Peter started collecting John Deere tractors after he retired in 1989 from racing Super sedans at Speedway.

I purchased his Chev Corvette Super Sedan and continued racing that car.

We then drove into Swan Reach to the Classic Car Gallery where the Murray Mallee Auto Club hosted us for lunch. We were the first car club to visit the Gallery since it opened on April 22nd.

M.M.A.C. President Tony  Friebel and his wife Sonya along with club members provided us a great lunch seated in their undercover outdoor area adjoining the Gallery. We then perused the 14 vehicles in the Gallery all of which are owned by Mr. John George, who also funded the renovation of the garage/petrol station which is now the Gallery.

On reflection we could conclude that the creation of the Classic Car Gallery to promote Swan Reach was both successful and efforts justified as the town was a hive of activity with our club members and their vehicles, as well as passengers from the Murray Princess which was berthed at the wharf.

Thanks to the Murray Mallee Auto Club for their hospitality and to all who participated in this run. We had a total of 24 vehicles, 46 members and 5 visitors present. 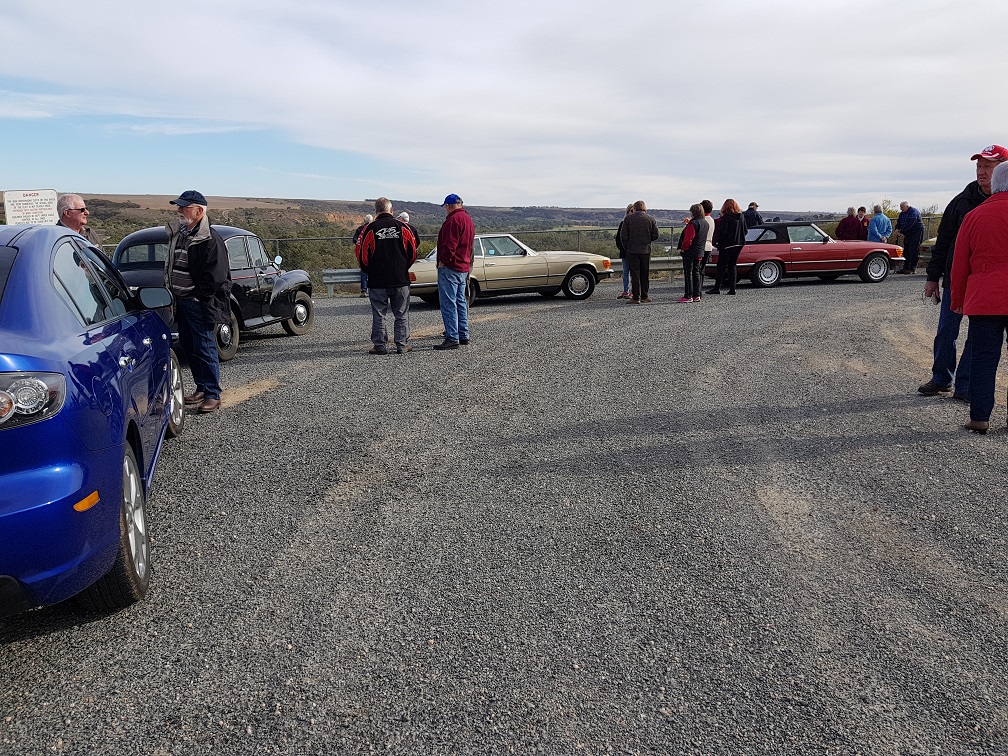 At the lookout after morning tea break at Walker Flat 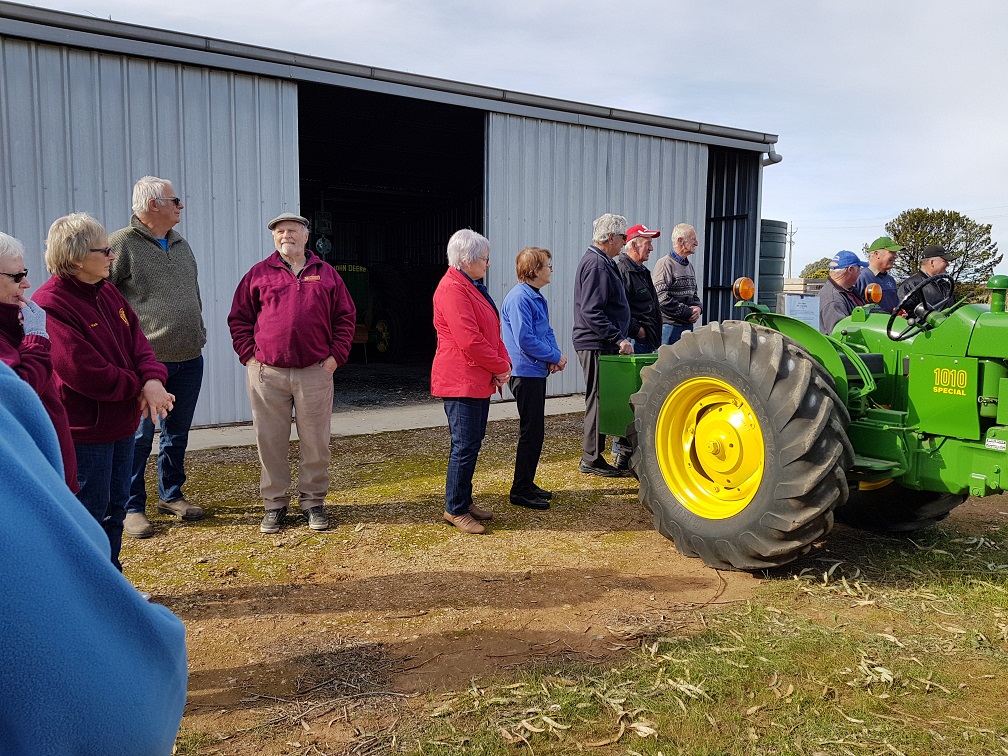 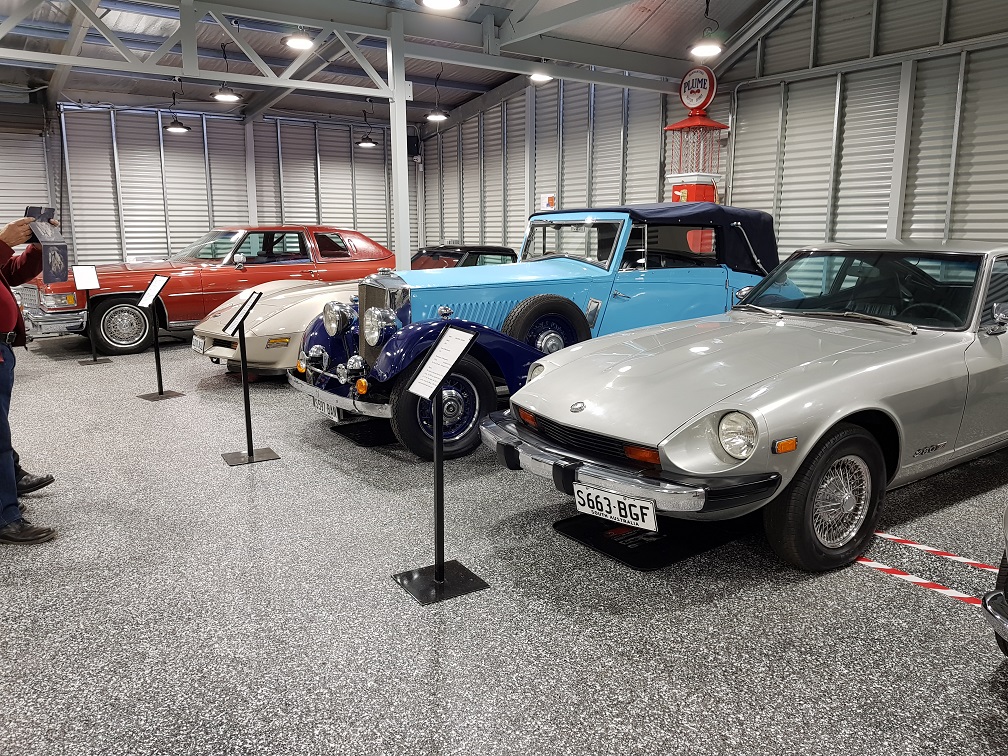 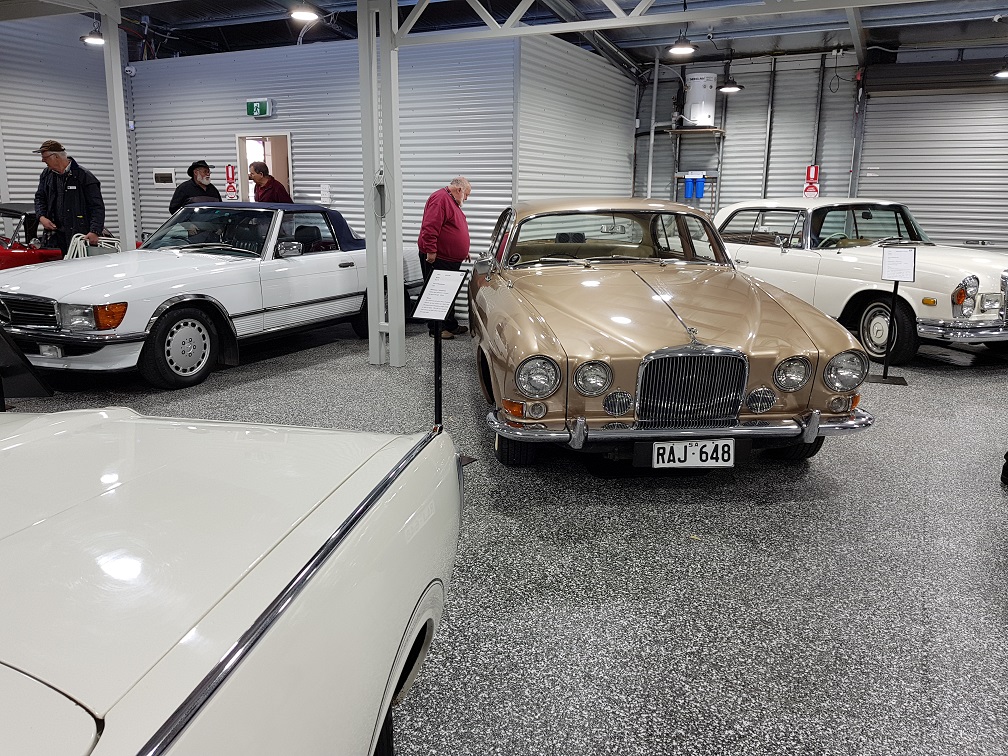 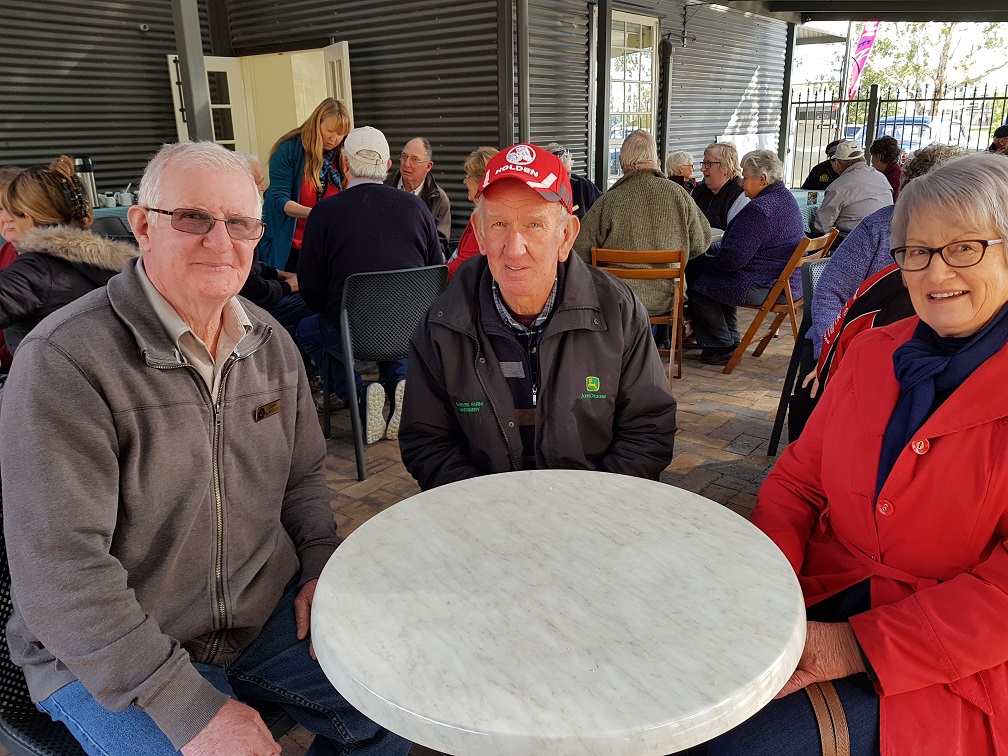 Above  L to R: Dennis Scarman Colin Wegener and Raelene Wegener waiting for lunch to be served 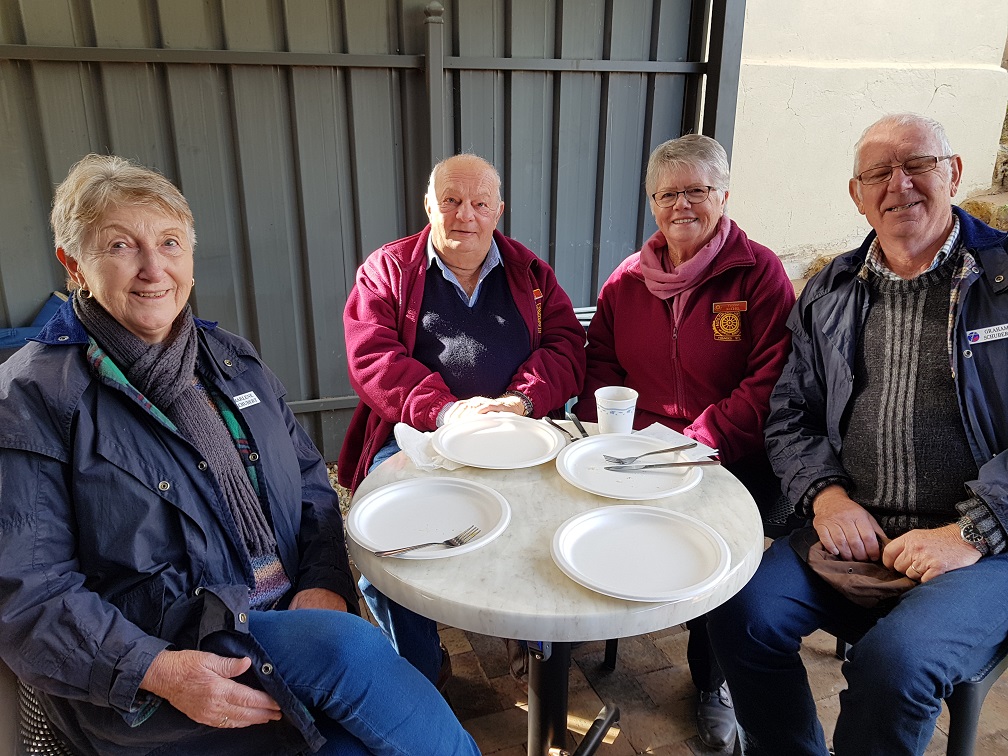 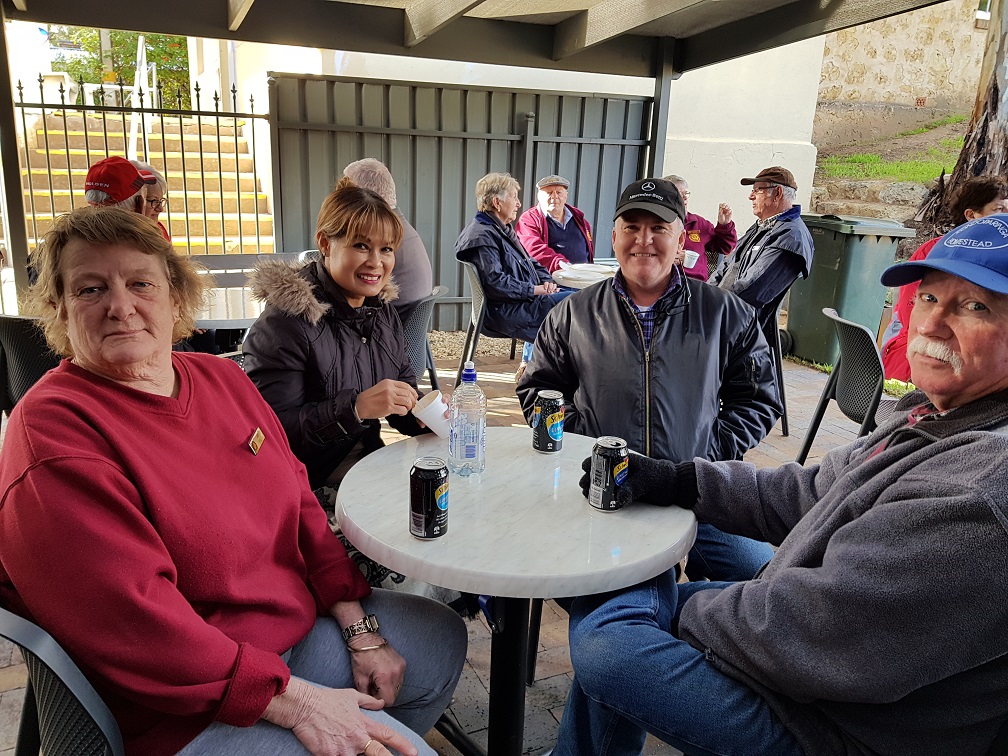 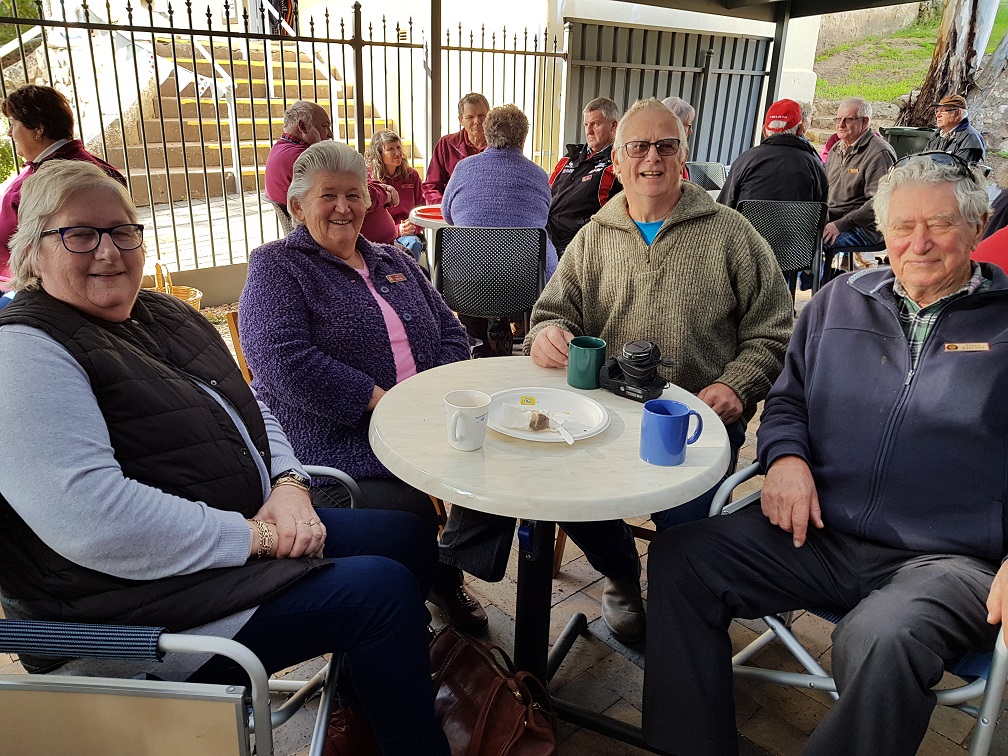 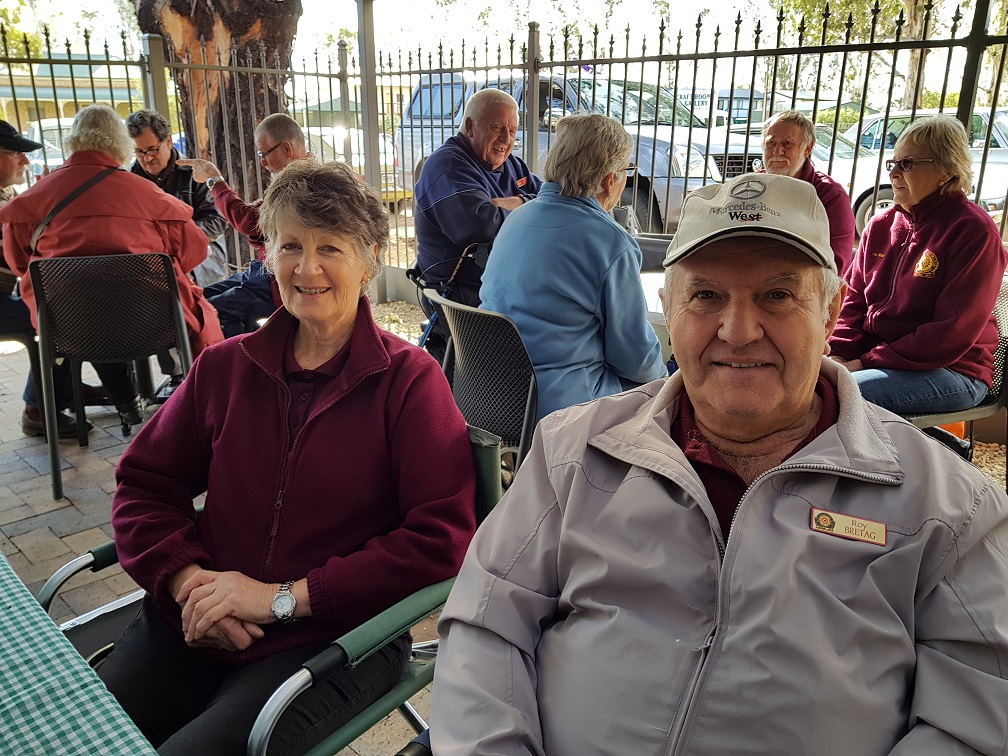