In the Aussie vernacular, what a ripper of a day! I was a little worried that I was asking members to drive their beloved cars over dirt roads. But when I realised we had 40 cars and 76 people, most of my worries flew out of the window. The weather, despite those that thought it could be raining! Ha! ha! Turned out to be a lovely sunny day. We drove to Cambrai for morning smoko, where we stopped in the O.S.& P Park, what a delightful spot right opposite the toilets. What more could we ask for. We had arranged to have the “Red Cross Shop”open, although apparently they are always open on a Sunday. So maybe put that in your diary for a quiet Sunday drive. The Ladies seemed to enjoy their time there. Plus its good to support such a well known Organisation. 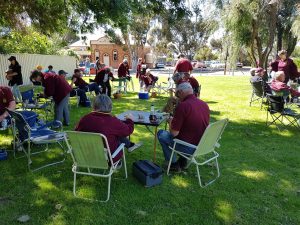 Then off to Wayne & Viktoria Johns home for the main event of the day. Despite the dirt roads, which we promised was “good dirt road “……if there is such a thing, was made up for by the lovely Marne Valley. Myra & I have driven that track before, and always enjoy the scenery.

We arrived at Black Hill. Did anyone notice Wayne flying up above us?, checking where we were? He probably alerted Viktoria to start up the urn for a well earned cuppa.

I always find it interesting to hear people’s experiences, and listening to Wayne telling of how they come to be living at Black Hill, organising his own power for the house and workshop and how he has accumulated so many planes and tell us of the history was a revelation. He even got out his own grader and graded some of the tracks into their property to make it easier for us.  A very interesting and resourceful character. But you know, behind every successful man is a wife saying “Yes Dear”. So our admiration and thanks to Viktoria for the part she has played in Wayne’s life and in helping with the run. 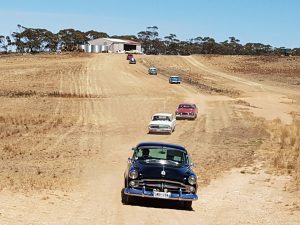 After a relaxing lunch in the shade of the trees we then set off to Shell Hill, about 6 kms from Black Hill. It is an ancient site believed to be approximately 5 million years old. The hill is a deposit of oyster shells which in some places are 6 metres deep.

I think that part of the enjoyment of the run, was just sitting around with members and chatting, that is something we do very well. In fact the feedback to me, from newer members is the friendliness of our Club. So keep up the good work. It was great to see John & Muriel Trapnell join us, they now live at Hamley Bridge.

In closing Myra & I would like to thank all those who attended, and helping to make it such a success. 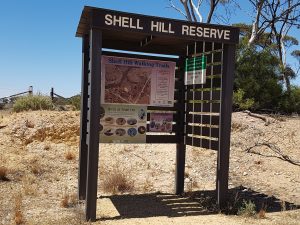 Information board at Shell Hill. 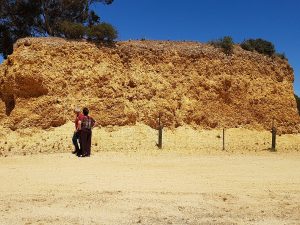