It was a very warm morning when 49 Club members  and 24 cars left the Clubrooms on Sunday November 8.  The Run got off to a good start, Nick McCues was the first stop for us to view his display of  tractors and machinery , we were all amazed at the working exhibits which were well displayed and lovingly restored. Nick had an Apple Peeler and Coring machine built in 1899, have to admit we would all need a huge kitchen to be able to use this! 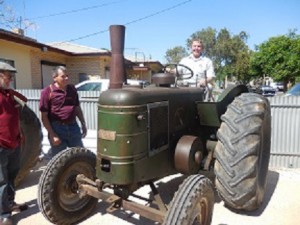 Claude Minge testing one of the tractors on display

Tractors that started with a 12 gauge shotgun cartridge, stationery engines pumping water and generating power,  in general it was a smorgasbord of past machinery, mainly tractors in beautiful working order.

After spending considerable time with Nick it was time to head off to Rodney McCue’s  (Nick’s Dad) museum and view his display.
We couldn’t believe that Rodney had so many cars motorbikes and other memorabilia in his house behind the Bakery. We saw lovingly restored cars including a beautiful racing Elfin, motor bikes old and new, and the largest collection of Coca Cola cans, bottles dress jackets, cuff-links and rings all bearing the well known insignia. There was so much in his Coca Cola display that we were all gobsmacked.
Rodney’s workshop was the envy of the men, with his air lifter work platform. He had rooms with displays of clocks and other lovingly restored antiques. Of course being at the Bakery we were then able to sit down and enjoy coffee and cake and have a chat about all that we had seen.
The Club presented both Nick and Rodney with Club coffee mugs filled with sweets in appreciation for allowing us to visit and view their displays.
We then travelled to Old Swanport Road and had a fun competition for the Mal Fountain Trophy. This was an ‘out-of-gear’ rolling competition started by Yours Truly with John Courtney deciding that Kevin and Helen Hosgood were the worthy winners.  A good simple fun time. 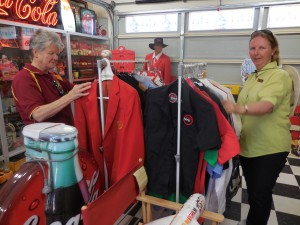 We then continued on to Swanport Reserve, a lovely shaded area on the River. The BBQ was quickly set up and the smell of sausages cooking started our taste buds working again. I would have thought that after coffee and cake at McCue’s that the Members wouldn’t be hungry, WRONG!  we all tucked in and chatted and enjoyed each other’s company.
The weather was good, a little hot but after having a cold winter it was lovely to warm up and enjoy.
Our thanks to the Chefs John Courtney, Kym Cooper, Graham Edwards and Terry Mabbitt.
It was a good turnout of Members and feel sure that Mal and Judy would have approved of the day.

Report by Howard and Myra Wright