After late notification of start time we arrived on November 22 at 8 am to depart at 8.30 for our run.   There were 22 cars and 2 motor cycles who made the journey to Williamstown in overcast but pleasant weather conditions. The motor cyclists did the usual thing and were sitting enjoying coffee at the bakery as we entered Williamstown. Good luck to them. After a short “comfort stop” of 30 minutes we departed with 26 cars and 2 motor cycles.

We must explain we had many out of club visitors who were very welcome, some were family, some were from other clubs including Graham Klingberg and his wife who travelled from Maitland, he brought Malcolm Blinman with him, as well we also had a Gawler club member, Joe Porker. 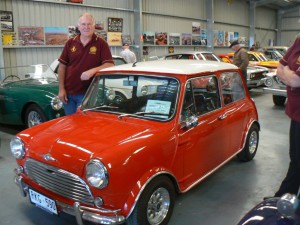 On arrival at the shed Clem Smith indicated that there was free tea and coffee for all and there were some chairs for those who needed to sit down. There were 30 very shiny cars for us to view and Clem stated he was very happy to answer questions or just chat with people. The collection is a private one and covers a broad range. Many of the vehicles had their bonnets up much to the delight of those present, but I think the Knight in the back of the shed which had the back door open to allow you to see the large open area, comfortable looking seat and timber bar complete with cut glass decanters for beverages caught a lot of attention. 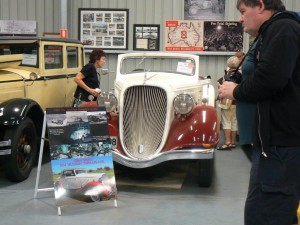 An hour later we thanked Clem and his right hand man Gordon Sweeney, who cleans and cares for the cars and some adjourned to the race track some to the Hotel and some to the Takeaway for a mobile meal as they had other things to do. The meals at the Mallala Hotel were very good pub food, well served and very filling, in fact too much for quite a few. The only problem was the very friendly flies in Mallala, they were every where we went.

The Museum was well worth the wander and could not be faulted, their displays were very well presented and at $4.00 a very cheap way to spend time learning or reminiscing. 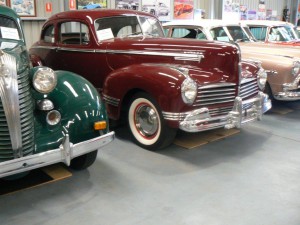 Peter and I would like to thank all those who attended the run and you made it a very pleasant and enjoyable day for everyone.

Report and photos courtesy of Peter and Pat Jennings