The Annual Presentation Dinner this year was held at the Murray Bridge Bowling Club on Saturday March 25th.

The gathering of 55 members comprised of some new and not so new members, including some who were founding members of the club when it was formed some 45 years ago. President John Courtney welcomed them all, then briefly explained the night’s proceedings, after which everyone resumed earnestly trying to solve the world’s problems, or perhaps just relaxing in the beautifully presented Bowling Clubrooms.

The main course was served, unfortunately not the ‘alternative drop’ as expected, but delicious none the less. Then the official part of the evening began. John Courtney, ably assisted by Brenda Cowie, commenced with the presentation of the Keeper Trophies to the winners from the 2015/2016 year.

Then it was on to the presentation of the Perpetual Trophy winners for 2016/2017.

Sausage Sizzle – Winner of quiz set by organizer of run.

Ladies Day – Winner of quiz set by organizer of run.

Vernon & Cecily Graetz , who were among the founding members of the club, then presented a new trophy to the club, to be known as the Founders Trophy. This magnificent trophy, highlighting some of club member Jeff Martin’s formidable woodworking skills, will be presented in future years for a purpose yet to be finalised.

There were a number of members who were absent, on holidays at various locations interstate and this included the Club Patron, Howard Wright, who sent a letter of congratulations from Bundaberg, Queensland, to all of the winners.

With desert served, President John congratulated the Bowling Club kitchen and bar personnel on a wonderful evening , thanked all Auto Collectors members for their attendance and closed the evenings proceedings. 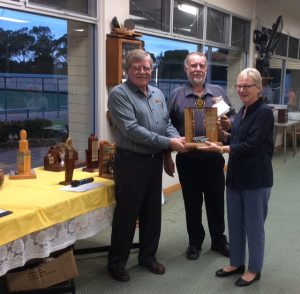 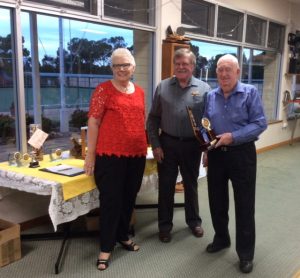 Brenda Cowie (left), and Les Cowie (right) were the winners of the Patron’s trophy, presented by President John Courtney (centre) 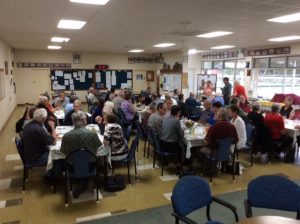