Goolwa Wharf was the destination for 42 Auto Collectors Club of Murray Bridge (ACCMB) members recently. The day out commenced with 21 vehicles departing the ACCMB clubrooms in cool weather.

Cars travelled to Milang via Brinkley Road, Mulgundawa and Langhorne Creek before stopping for morning tea in very cool conditions with most members choosing to eat in their vehicles. After a short break it was off to the Goolwa Wharf, the home of the paddle-steamer Oscar “W”. On arrival members vehicles were parked as a display along the wharf for public viewing while the group were plying the waters of the river Murray on the Oscar “W”.

The ACCMB club members were met on arrival by “The Friends of the PS Oscar W” volunteer group to be signed in for their chartering of the 107 year old, wood fired paddle steamer for the next 3 hours. ACCMB member Mr. Max Lindsay who organized the outing welcomed all the members aboard.

Mr. Lindsay was to be the Captain for the cruise while former foundation member of the ACCMB, Mr. Dennis Borchardt had the job of the vessel’s Mate.

With the boiler all full of steam the Oscar “W” cast off away from the wharf and headed downstream past Hindmarsh Island , towards the Goolwa barrage before turning around, past the Goolwa Aquatic and Sailing/Yacht clubs before heading upstream for a turnaround nearing Clayton before returning to the Goolwa wharf.

During the cruise a brief history was given of the Oscar “W”. The vessel was built in Echuca, Victoria in 1908 by Franz Oscar Wallin and named after his son, Oscar.

Oscar is powered by a 16 horse power wood burning , 2 cylinder steam engine and was designed to tow cargo barges loaded with wool, grain and general cargo up and down the river Murray.

From 1908 until 2001 Oscar had many and varied owners along the river Murray , finally with ownership being taken over by the Alexandrina Council and she is sailed ,maintained and cared for by a dedicated group of volunteers called “The Friends of the PS Oscar “W”.

During the cruise members were given a tour of the wheelhouse, steam engine room complete with loading the boiler with wood. 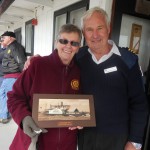 Myra showing off her raffle prize with Captain Max Lindsay